Joe Biden and his VP counterpart Kamala Harris ran on a campaign that promised investment into the clean energy industry, along with supporting the climate action agenda. Regardless of who you supported in the election, or your political affiliation, with a new administration, comes the opportunity to invest in the clean energy sector. With promises of clean energy policy escalation, changes are coming that may affect you! 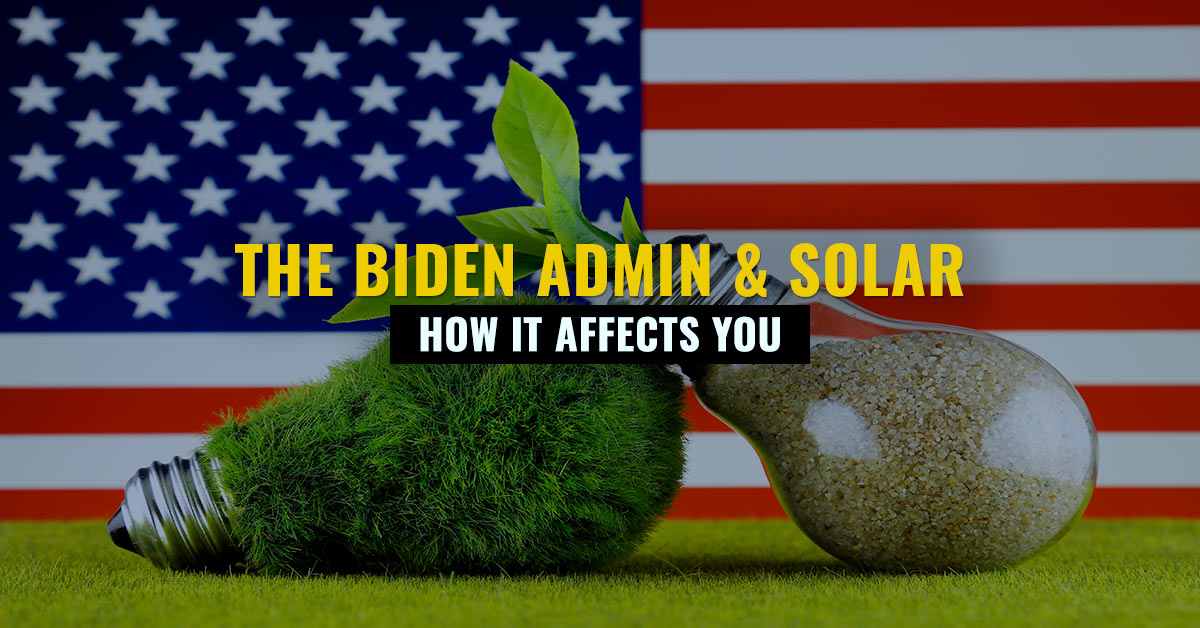 What You Can Expect

There are three main areas in which the Biden Administration plans to push through clean energy actions.

These three areas show huge potential to change when it comes to renewable energy during the Biden administration. If you have been considering solar power (or are already a solar customer) in the United States, what does this mean for you?

In late 2020 Congress passed a spending bill. This bill extended tax credits that support investments in both solar and wind energy sources. During this time the federal government invested $5 billion in solar energy, which included almost five Gigawatts of solar energy storage.

Although started before Biden came into office, there is a high chance that more will continue to be spent in 2021. When using a tax credit it is functionally the same as federal spending, and there is much thought that these tax credits will trickle down over the next 15 years. If you’re a business owner, you may be in for some alternative options with the various solar grants for small businesses.

How Do Tax Credits Work?

In addition to the money you’ll save with solar, when an individual or business purchases solar systems, they are given credits on their taxes. This means that they will receive a portion of the money spent on solar, back on their taxes. Essentially, the government is buying some of the solar panels for the owner. This is to motivate solar spending. You can always find out how much solar panels will cost you and calculate your potential savings with the tax credits afterward.

If attempting to keep all parties happens, the quickest step that the Biden administration might take is to make a change in trade policy. The Trump administration started somewhat of a trade war, which resulted in a hard shock for solar and clean energy.

Changes to be reversed regarding trade policy might include the removal of tariffs that were imposed on imported solar cells and modules. For obvious reasons, these tariffs have levied a de facto tax on the entire industry. This raised overall prices for solar, which slowed down the rate of growth in the U.S. These tariffs were originally meant to hurt China, but also greatly affected allied countries such as Canada, Taiwan, and South Korea.

These tariffs included in the trade policy were put into place under the guise of helping U.S module manufacturers. Unfortunately, many of these were owned by multinational corporations. This eventually hurt the supply coming from American manufacturers and put many electricians and laborers out of work. Reversing these policies would encourage the growth of the solar industry once again, bringing down prices.

There is also an opportunity for the Biden administration to reverse trade barriers imposed on clean energy components from China. These items include inverters and lithium-ion batteries. Doing this leaves hope that solar equipment and parts will be less expensive and make solar continue to be more affordable.

With the various tax credits involved and the Biden-Harris agenda, communities of color, along with those in rural and urban low-income communities, may have an opportunity. Because many of these communities suffer from a variety of energy-related challenges, solar power has never even been an option. With these policies, the benefits of going solar are ever-increasing.

In regards to the EPA, the Biden administration may be taking important actions to reduce the reliance on fossil fuels in the United States and push towards using more clean energy. The first order of business would need to be a revisiting of emission rules regarding fossil fuels such as power plants, natural gas, as well as oil and gas companies. There would need to be a hard look into how we can reduce our reliance on this industry, and reduce carbon emissions.

One thought is to change the fuel economy standards when it comes to vehicles, trucks, and generators. Although this may not directly impact solar, it could push the country in the direction of using electric vehicles. With the rise of the EV, solar power would become much more popular to have in the home, thus driving down the price overall.

What Does It Mean For You?

As a consumer, regardless of if you voted for Biden or not, these policies could benefit you. Each of these areas can greatly bring up the solar power industry and provide you with the ability to invest in clean energy for your future. If you want to learn more about a solar installation for your home or commercial building, call Harmon Solar today at 800-281-3189!

The post The Biden Administration & Solar Energy: How It Affects You appeared first on Harmon Solar.