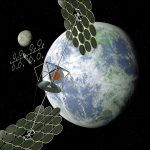 It may sound like a popular sci-fi sequel with gigantic solar power stations floating in space, beaming enormous amounts of energy to Earth.

However, space-based power stations are looking at this as a serious engineering prospect with the hope that they can take renewable energy into orbit. The European Space Agency wants to fund such projects, predicting that the first industrial resource from space would be beamed power.

Climate change poses a gruelling challenge, which includes rising global temperatures and shifting weather patterns. Radical changes in how energy is generated and consumed can help to overcome the challenge.

Renewable energy technologies can offer viable solutions, and in recent years they also feature improved efficiency and lower cost. A major barrier is that they don’t provide a constant supply of energy. Ultimately, a solution is to store energy on a large scale before switching to renewable sources.

A feasible way would be to generate solar energy in space. The challenge of a continuous supply of sunlight can also be resolved. A space-based solar power station could orbit and face the Sun round-the-clock. Plus, the Earth’s atmosphere can absorb and reflect some of the Sun’s light. As a result, solar cells above the atmosphere will receive more sunlight and produce more energy.

A significant challenge would be to overcome assembling, launching, and deploying such large structures. A single solar power station would need to cover as much as 10 sq.km (4.9 sq.miles). Another critical facet would be using lightweight materials, as the biggest expense will be the cost of launching the station into space on a rocket.

One proposed solution is to develop a throng of smaller satellites that will come together and configure to form a single, large solar generator. In 2017, researchers at the California Institute of Technology outlined designs for a modular power station, comprising thousands of ultralight solar cell tiles.

Furthermore, developments in manufacturing, such as 3D printing, are also being examined for their potential in space power. Researchers at the University of Liverpool are exploring new manufacturing techniques for printing ultralight solar cells on to solar sails. A solar sail can harness the effect of the Sun’s radiation pressure and propel a spacecraft forward without fuel due to its nature of being lightweight, foldable, and highly reflective membrane.

Ultimately, there is still a lot of work to be done in this field. The scientific community worldwide is committing time and effort to bring about a tool that can help combat climate change.

Photo: A space solar array could consist of one large structure, or many smaller ones gathered together (Credit: Nasa)

Did you miss our previous article…
https://www.solarizemissoula.org/?p=1009